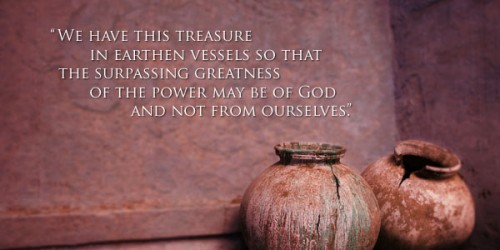 Warriors for Christ must reach into The Treasure The Lord put in us during times we feel:

His treasure is deposited in these earthen vessels. Each one of us has a VAULT in us that is full of all we need or desire. Everything pertaining to life and godliness is in it. These are great treasures from
The Lord of All Creation. We partake in His Divine Nature by receiving and employing His Great and Precious Promises on Earth as they are in Heaven.

We must forsake the flesh and the pulls of this body we live in and dig in fully to the things of the spirit in us. Walk in The Spirit and you will not fulfill the lust of the flesh.

How many times have we yielded to the easy surface emotions and responses that either helped little or made things worse, when God Himself has equipped us with Mighty Tools and Weapons to be sufficient in every circumstance.

Jesus was all sufficient, He was fully equipped to meet every challenge, every needs and every attack against who He was. He overcame, and put in us those same treasures, so that we may overcome to. 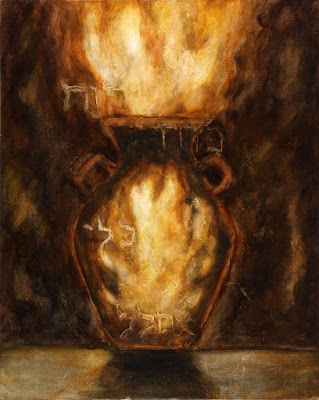 7 We now have this light shining in our hearts, but we ourselves are like fragile clay jars containing this great treasure.This makes it clear that our great power is from God, not from ourselves.

8 We are pressed on every side by troubles, but we are not crushed. We are perplexed, but not driven to despair. 9 We are hunted down, but never abandoned by God. We get knocked down, but we are not destroyed. 10 Through suffering, our bodies continue to share in the death of Jesus so that the life of Jesus may also be seen in our bodies. 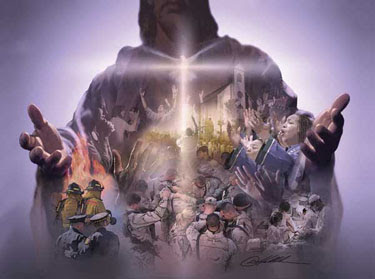 8 Though I am the least deserving of all God’s people, he graciously gave me the privilege of telling the Gentiles about the endless treasures available to them in Christ. 9 I was chosen to explain to everyone this mysterious plan that God, the Creator of all things, had kept secret from the beginning.

10 God’s purpose in all this was to use the church to display his wisdom in its rich variety to all the unseen rulers and authorities in the heavenly places. 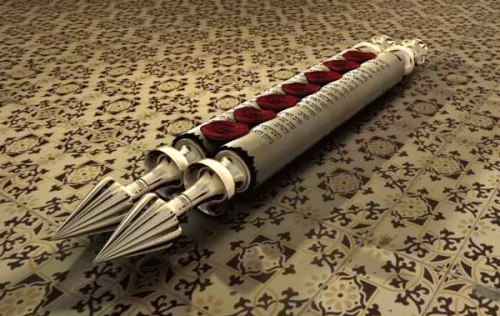 20 For all the promises of God in Him are Yes, and in Him Amen, to the glory of God through us. 21 Now He who establishes us with you in Christ and has anointed us is God, 22 who also has sealed us and given us the Spirit in our hearts as a guarantee.

13 In Him you also trusted, after you heard the word of truth, the gospel of your salvation; in whom also, having believed, you were sealed with the Holy Spirit of promise, 14 who[a] is the guarantee of our inheritance until the redemption of the purchased possession, to the praise of His glory. 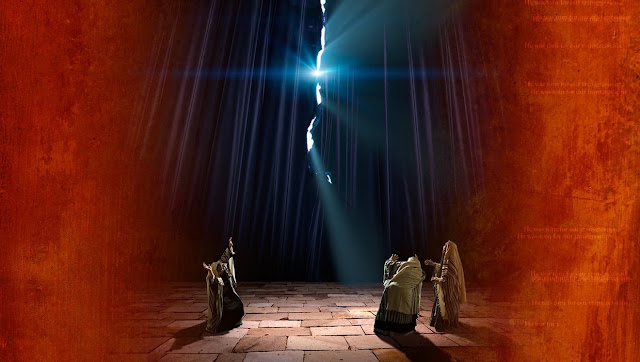 50 And Jesus cried out again with a loud voice, and yielded up His spirit.

51 Then, behold, the veil of the temple was torn in two from top to bottom; and the earth quaked, and the rocks were split, 52 and the graves were opened; and many bodies of the saints who had fallen asleep were raised; 53 and coming out of the graves after His resurrection, they went into the holy city and appeared to many.

54 So when the centurion and those with him, who were guarding Jesus, saw the earthquake and the things that had happened, they feared greatly, saying, “Truly this was the Son of God!” 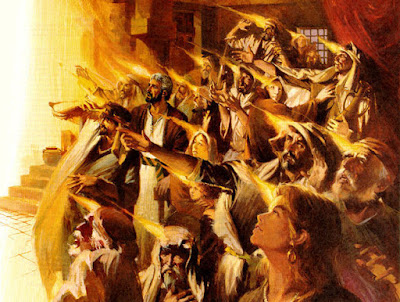 49 Behold, I send the Promise of My Father upon you; but tarry in the city of Jerusalem until you are endued with power from on high.”

4 And being assembled together with them, He commanded them not to depart from Jerusalem, but to wait for the Promise of the Father, “which,” He said, “you have heard from Me; 5 for John truly baptized with water, but you shall be baptized with the Holy Spirit not many days from now.” 6 Therefore, when they had come together, they asked Him, saying, “Lord, will You at this time restore the kingdom to Israel?” 7 And He said to them, “It is not for you to know times or seasons which the Father has put in His own authority. 8 But you shall receive power when the Holy Spirit has come upon you; and you shall be witnesses to Me in Jerusalem, and in all Judea and Samaria, and to the end of the earth.” 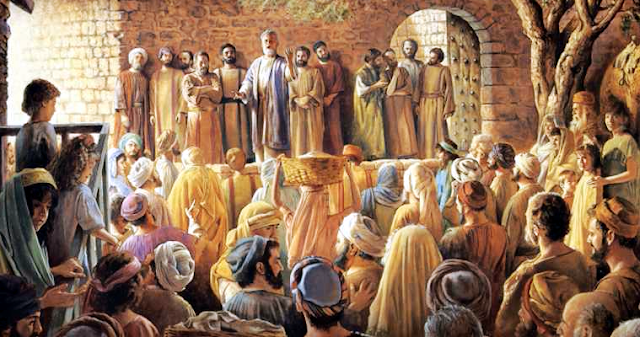 Coming of the Holy Spirit

2 When the Day of Pentecost had fully come, they were all with one accord in one place. 2 And suddenly there came a sound from heaven, as of a rushing mighty wind, and it filled the whole house where they were sitting. 3 Then there appeared to them divided tongues, as of fire, and one sat upon each of them. 4 And they were all filled with the Holy Spirit and began to speak with other tongues, as the Spirit gave them utterance.

5 And there were dwelling in Jerusalem Jews, devout men, from every nation under heaven. 6 And when this sound occurred, the multitude came together, and were confused, because everyone heard them speak in his own language. 7 Then they were all amazed and marveled, saying to one another, “Look, are not all these who speak Galileans? 8 And how is it that we hear, each in our own language in which we were born? 9 Parthians and Medes and Elamites, those dwelling in Mesopotamia, Judea and Cappadocia, Pontus and Asia, 10 Phrygia and Pamphylia, Egypt and the parts of Libya adjoining Cyrene, visitors from Rome, both Jews and proselytes, 11 Cretans and Arabs—we hear them speaking in our own tongues the wonderful works of God.” 12 So they were all amazed and perplexed, saying to one another, “Whatever could this mean?”

13 Others mocking said, “They are full of new wine.”

14 But Peter, standing up with the eleven, raised his voice and said to them, “Men of Judea and all who dwell in Jerusalem, let this be known to you, and heed my words. 15 For these are not drunk, as you suppose, since it is only the third hour of the day. 16 But this is what was spoken by the prophet Joel:

17 ‘And it shall come to pass in the last days, says God,
That I will pour out of My Spirit on all flesh;
Your sons and your daughters shall prophesy,
Your young men shall see visions,
Your old men shall dream dreams.
18 And on My menservants and on My maidservants
I will pour out My Spirit in those days;
And they shall prophesy.
19 I will show wonders in heaven above
And signs in the earth beneath:
Blood and fire and vapor of smoke.
20 The sun shall be turned into darkness,
And the moon into blood,
Before the coming of the great and awesome day of the Lord.
21 And it shall come to pass
That whoever calls on the name of the Lord
Shall be saved.’

22 “Men of Israel, hear these words: Jesus of Nazareth, a Man attested by God to you by miracles, wonders, and signs which God did through Him in your midst, as you yourselves also know— 23 Him, being delivered by the determined purpose and foreknowledge of God, you have taken by lawless hands, have crucified, and put to death; 24 whom God raised up, having loosed the pains of death, because it was not possible that He should be held by it. 25 For David says concerning Him:

‘I foresaw the Lord always before my face,
For He is at my right hand, that I may not be shaken.
26 Therefore my heart rejoiced, and my tongue was glad;
Moreover my flesh also will rest in hope.
27 For You will not leave my soul in Hades,
Nor will You allow Your Holy One to see corruption.
28 You have made known to me the ways of life;
You will make me full of joy in Your presence.’

29 “Men and brethren, let me speak freely to you of the patriarch David, that he is both dead and buried, and his tomb is with us to this day. 30 Therefore, being a prophet, and knowing that God had sworn with an oath to him that of the fruit of his body, according to the flesh, He would raise up the Christ to sit on his throne, 31 he, foreseeing this, spoke concerning the resurrection of the Christ, that His soul was not left in Hades, nor did His flesh see corruption. 32 This Jesus God has raised up, of which we are all witnesses. 33 Therefore being exalted to the right hand of God, and having received from the Father the promise of the Holy Spirit, He poured out this which you now see and hear.

34 “For David did not ascend into the heavens, but he says himself:

‘The Lord said to my Lord,
“Sit at My right hand,
35 Till I make Your enemies Your footstool.”’
36 “Therefore let all the house of Israel know assuredly that God has made this Jesus, whom you crucified, both Lord and Christ.”

37 Now when they heard this, they were cut to the heart, and said to Peter and the rest of the apostles, “Men and brethren, what shall we do?”

38 Then Peter said to them, “Repent, and let every one of you be baptized in the name of Jesus Christ for the remission of sins; and you shall receive the gift of the Holy Spirit. 39 For the promise is to you and to your children, and to all who are afar off, as many as the Lord our God will call.”

40 And with many other words he testified and exhorted them, saying, “Be saved from this perverse generation.” 41 Then those who gladly received his word were baptized; and that day about three thousand souls were added to them. 42 And they continued steadfastly in the apostles’ doctrine and fellowship, in the breaking of bread, and in prayers. 43 Then fear came upon every soul, and many wonders and signs were done through the apostles. 44 Now all who believed were together, and had all things in common, 45 and sold their possessions and goods, and divided them among all, as anyone had need.

46 So continuing daily with one accord in the temple, and breaking bread from house to house, they ate their food with gladness and simplicity of heart, 47 praising God and having favor with all the people. And the Lord added to the church daily those who were being saved.